THE HORROR OF KOREAN SCHOOLGIRLS

--COPY FROM AN E-MAIL I SENT TO SOMEONE:

Talking about the paranoid streak, it also reminds me of some real crime news. I don’t know much about the psychological stuff, but I think there is something which might be called a pseudo-self, or an imaginary self, or a self-image, or something like that. Sometimes a person kills other people not because he is physically attacked by other people, but because his imaginary self, or his self pride is being attacked. The character in your screenplay indirectly reminds me of something happening 20 years ago in Bangkok. It is a strange rob-and-kill case. In that case a male criminal was robbing a high-school girl in a bus in Bangkok, and he killed her in cold blood. What is strange is that he killed her not because she resisted giving her money, but because she laughed at him after giving him her belongings. I guess that her laughing might have hurt his imaginary self so much that he responded brutally like that.

I just saw the DVD of LA BELLE CAPTIVE (1983, Alain Robbe-Grillet, A+). I like it a lot, though not as much as LAST YEAR AT MARIENBAD, TRANS-EUROPE EXPRESS, or EDEN AND AFTER. I think one reason is because I watched LA BELLE CAPTIVE on a TV screen, which lessens the power of Robbe-Grillet’s strong images.


--Sud (http://autonomybeans.exteen.com ) has left a comment in my blog here:
http://celinejulie.blogspot.com/2007/05/favorite-korean-ghost-films.html

If you want to try some Korean ghost films, I also recommend you these four films:

It stars Yu Ji-tae, the leading actor of ONE FINE SPRING DAY (2001, B+), OLDBOY (2003, A) and RUNNING WILD (2006, Kim Sung-su, A-). I think he is cute. The film INTO THE MIRROR is also good. It is not as messy as most Asian ghost films. The plot is logical. The film interestingly plays with mirrors. One thing that I like very much in this film is that it also mentions a lot of old paintings with mirrors in them.

Synopsis of INTO THE MIRROR from imdb.com:
>> Woo Yeong-min retired from the police force after trying to save his partner and causing his death. After a series of mysterious deaths in the shopping mall in which his uncle has allowed him to work as a security guard prior to its reopening, he must face both his own fear of mirrors and the mystery surrounding the fire that closed down the mall.<<


2.THE GHOST (2004, Kim Tae-kyeong, A)
http://www.imdb.com/title/tt0410537/
>> teenage girl suffering from amnesia discovers that she is somehow connected to a group of people who are being killed off one by one by a vengeful ghost.<<


3.BUNSHINSABA (2004, Ahn Byeong-ki, A)
http://www.imdb.com/title/tt0415689/
>> Yu-jin and her blind mother move to a small village from Seoul. On her first day at the new school, Yu-jin gets picked on by her classmates. Along with other victims of hatred, Yu-jin puts a curse on the four girls tormenting them through a Ouija Board. On her second day at school, one of the spellbound bursts into flames and dies just as she sits down where Yu-jin used the board. The next day, another victim burns to death, and now the school is enclosed by horror.<<

4.WISHING STAIRS (2003, Yun Jae-yeon, A-)
http://www.imdb.com/title/tt0370082/
>> Two friends at art college studying ballet find themselves competing for a single placement to go to a dance school in Russia. An urban legend about the staircase heading towards the dormitory building says that if you go up all twenty-eight steps and find a twenty-ninth, then you can ask for a wish to be granted and Yun Ji-seong knows just what she wants to wish for. But unknown to her, the wishing stairs have consequences, and she's about to find out the hard way.<<

THE GHOST, BUNSHINSABA, and WISHING STAIRS are all about suffering school girls. I think I like this kind of stories. 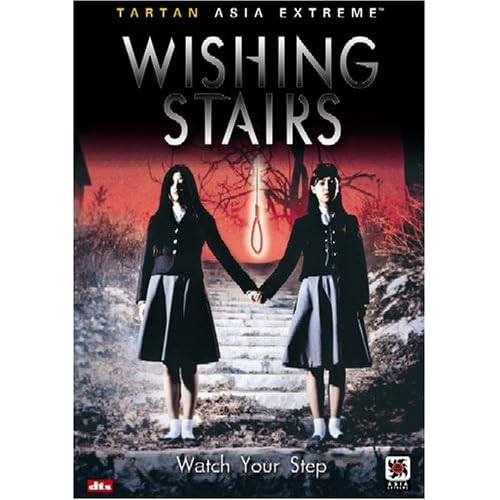