--I like it very much that INSECTS IN THE BACKYARD does not have a feel-good ending. The character of the daughter makes a very right decision at the end, because she decides that she doesn't mind at all that her boyfriend is a male prostitute who can be both top and bottom. I would make a decision like that, too.

The atmosphere of the film is like THE BEAUTIFUL WASHING MACHINE or some Malaysian indie films. It looks minimal. The house, or the dining table area in the house, does not seem to be really lived-in. It looks too clean, as clean as the restaurant with no customers in AFTERNOON TIMES (2005, Tossapol Boonsinsukh, A++++++++++). But maybe it is because there is only the father who really uses that space in INSECTS IN THE BACKYARD, while the son and daughter normally avoid the dining table space.

My most favorite scene in the film may be the scene in which the son asks whether he will die or not if he jumps from the bridge, and his handsome friend answers that he will not die because the friend will jump to help him. It is one of the most romantic scenes in Thai films for me.

I also like the face of the female owner of the resort in Pai in INSECTS IN THE BACKYARD very much. The expression on her face looks very funny while she is drinking with her guests.


--PSYCHOHYDROGRAPHY reminds me of LISTENER'S TALE (2007, Arghya Basu, India, A+++++++++++++++), because what makes me worship these two films are similar—the combination between images of empty landscape and ambient music which extremely stirs my imagination.

The last part of PSYCHOHYDROGRAPHY gives me the ultimate blissful experience. It is the same kind of experience I get when I saw BIRTH OF THE SEANEMA (2004, Sasithorn Ariyavicha), WINDOWS (1999, Apichatpong Weerasethakul), FIREFLIES (2005, Chawit Waewsawangwong), or from listening to such songs as TÄSSÄ MAASSA KUN NÄIN MAKAILEN by Kemialliset Ystävät.
http://www.youtube.com/watch?v=sbd71lG5pXc

The last part of the film, which shows an image of the sea for about five minutes, is as extremely beautiful as a painting. It unintentionally makes me contemplate about death. PSYCHOHYDROGRAPHY, which traces the flow of water from high moutains, through the cities, to the sea, unintentionally makes me think about human life, and what the hero of KOSMOS says. He says that every man, good or bad, pure or corrupted, will die. Maybe it is like the water in PSYCHOHYDROGRAPHY, which flows through beautiful landscape (happy times) and ugly surroundings (unhappy times), and ends up in the vast ocean (death).

Is PSYCHOHYDROGRAPHY a message film like OCEANS (2009, Jacques Perrin + Jacques Cluzaud), HOME (2009, Yann Arthus-Bertrand), OUR DAILY BREAD (2005, Nikolaus Geyrhalter), or IN COMPARISON (2009, Harun Farocki)? Maybe, maybe not. But I don't care about its message. The only thing I care is the blissful experience I get from its images and its sound.

The reason why I like ON THE COAST (2010, Merve Kayan + Zeynep Dadak, A+) the least in GUTS SHORT PROGRAMME 1 is nearly the same reason why I worship PSYCHOHYDROGRAPHY. I hate crowded beaches and crowded markets. I love empty beaches, especially the empty beach in AGATHA AND THE UNLIMITED READINGS (1981, Marguerite Duras).

I also love the reflections of the neon lights on the surface of water in PSYCHOHYDROGRAPHY very much. I think these images are as beautiful as a painting, too. 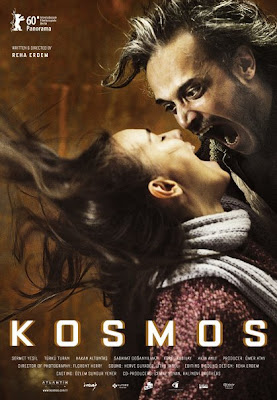 Posted by celinejulie at 9:46 AM