GM Magazine, Issue 385, August 2010, publishes a ten-page interview of Apichatpong Weerasethakul. It also publishes a quote from Sonthaya Subyen which I like very much.

Sonthaya said: "Guillermo del Toro, the director of PAN'S LABYRINTH, said, "There's something intangible in the real world, but our instincts can feel it. The only way we can touch it is by art or religion." The films of Apichatpong possess the miraculous power of the bliss of gazing. His films enable us to feel something which is beyond the frame of the image, and let us see the purity, the simplicity, and the magic which are integrated into the basic nature. This is because the unique characteristic of cinematic art is not clever dialogues, twisted storytelling, or stylistic show-off by playing with weird images." 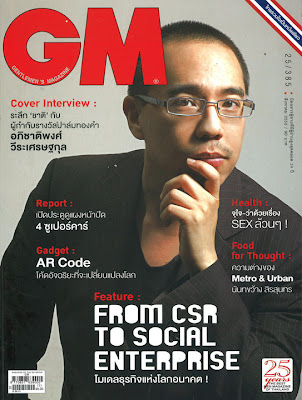 Posted by celinejulie at 5:48 PM