Things I find interesting in this film include:

1. One of the things I like very much in this film is that it arouses my imagination. HADES OF LIMBO unintentionally reminds me of the films MASUMI IS A PC OPERATOR (2001, Apichatpong Weerasethakul) and FUMIYO IS A DESIGNER (2001, Apichatpong Weerasethakul). Each of these two films of Apichatpong presents a face of a woman who shows no obvious emotions. The viewers must imagine by themselves the stories about these women or what these women are thinking about.

Rashidi once presented a long, silent, dialogue scene between a man and a woman in FILMORE (2011), but that scene doesn't arouse my imagination, because of the two main differences between FILMORE and HADES OF LIMBO. The first difference is the fact that in FILMORE it is clear how the man and the woman are related to each other. They are lovers. So it doesn't leave much space for me to imagine what they are talking about. But in HADES OF LIMBO, I don't know how the characters in the film are related to one another. Are they lovers? Are they siblings? Are they friends? Is there a love triangle? So it leaves much space for me to imagine about their conversations.

2. If I have to screen another film with HADES OF LIMBO, I may choose to screen it together with DOG SWEAT (2011, Hossein Keshavarz), because both films deal with the contemporary life of middle-class, young women and men in Iran. And both films seem to complement each other, like two sides of the same coin, because DOG SWEAT is narrative, while HADES OF LIMBO is non-narrative.

Another different thing between these two films is the fact that while DOG SWEAT makes us focus on the problems of the characters or what they are talking about, HADES OF LIMBO makes us focus on the gestures of the characters. Because we can't hear what they are talking about, we must focus instead on the faces and the movements of their hands or something like that. The focus on little gestures like this is something often overlooked in other films.

4.The sound in this film is as intriguing as in other films of Rashidi. There are many scenes in this film in which I hear the sound of water splashing on shore, but there is neither water nor beach in sight. We only see an empty swimming pool above which a man and a woman is having a conversation. Does this sound of water splashing imply an undercurrent of feelings between the characters? Does it imply that the characters yearn for something out of reach?

I also like the ambient electronic music used in some scenes in this film very much.

6. Rashidi's website says that this film is directed remotely from Ireland over Skype. I think this may be the second film that I have ever seen which was directed remotely. The first film in this case that I saw is PEE PONG (2010, Wachara Kanha, 30 min), which was directed remotely by Wachara in Thailand. He told his friend in Hawaii to shoot this film for him via internet messages or something like that, if I understand it correctly. And the resulting film still has the obvious signatures of Wachara, such as its puzzling quality. HADES OF LIMBO looks like it was shot by Rashidi himself, too. If I didn't read Rashidi's website, I would have assumed that Rashidi was there to shoot this film by himself.

7.This film also contains some puzzling scenes, which I think is a signature of Rashidi (with some exceptions, such as FILMORE). Puzzling things in this film include the shower scene and the scene of the black dog viewed from a hidden camera or something like that. What are the meanings of these scenes? 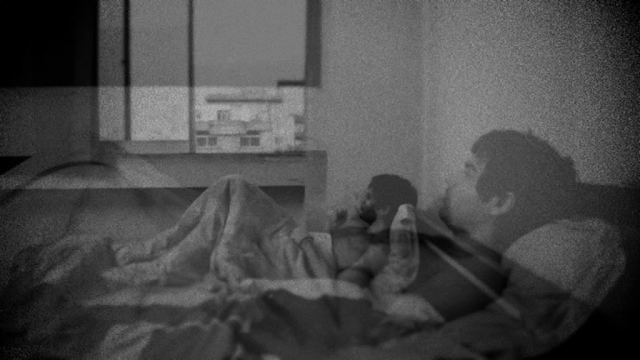 Posted by celinejulie at 1:56 AM