I made this list for Wiwat Lertwiwatwongsa. These are not my "most" favorite documentaries. They are just some documentaries that I like very much. 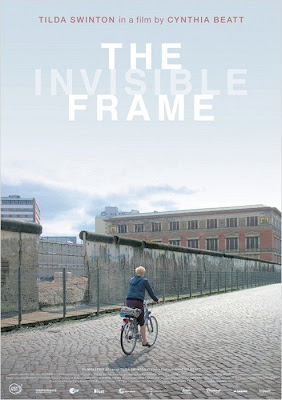 Posted by celinejulie at 11:32 PM No comments:

I like it very much, partly because it is the kind of thing I have never seen before. The play can be divided into two main parts. The first part is about the silent Q&A session with four dancers after a dance show choreographed by Pina Bausch. The questions come up on the screen behind the dancers, and the dancers try to answer them by their gestures, instead of speaking. The play says that this Q&A session must be done in silence because it can be interpreted in an undesirable ways.

The second part of this play is extremely hilarious. The play substitutes Pina Bausch with a food blender. For each question asked to Pina, the dancers will put various things into the blender, turn on the switch, and see what the blender will do to various things inside it. The dancers also ask some audience members to take part in this experiment. In the show that I attended, Chayanin Tiangpitayagorn, a Thai film critic, took part in the performance near the end of the play.

I'm not sure what this play means, but I like it very much, and prefer it to
IMPROPER FRACTION: A STUDY ON FRAGMENTATION (2011) and UNKNOWN LANDSCAPE (2009), both of which are directed by Thanapol and Vidura Amranand. I think POST SHOW TALK is much more audience- friendly than his two former plays. His three plays that I saw are all difficult to understand. But in a way I think IMPROPER FRACTION and UNKNOW LANDSCAPE are not much different from many dance shows and physical theatre plays. I often don't understand the contents or the messages in these kinds of shows, and IMPROPER FRACTION and UNKNOWN LANDSCAPE are just ones among many of them, while POST SHOW TALK is very different from them. It is more like a performance art or a conceptual art.

POST SHOW TALK unintentionally reminds me of what I like in a great mockumentary film called BUD-DHA-KALA (2005, Thanapol Virulhakul), which is one of my most favorite films I saw that year.
http://www.sensesofcinema.com/2006/38/world_poll3/

In the film BUD-DHA-KALA, Thanapol explores how Thai people worship the small images of Buddha which they like to wear as a part of their necklace. Thanapol also makes small images of Buddha with chocolate or something like that, and asks many people how they think of this image of Buddha in chocolate. Would they still worship it like the ones they wear in their necklaces? Would they eat it instead of wearing it or worshipping it? What is the true value of the supposedly-sacred thing they wear in their necklaces? What is really permanent? What is temporary? Is religion permanent or temporary? 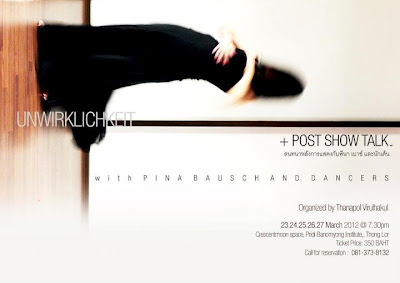 Posted by celinejulie at 11:40 AM No comments:

" The weird tale of a small cinema theatre manager who sinks into madness when the owner - his boss - announces him that the cinema will definitely close. The young manager is in love with the theatre and all the souvenirs hidden in the basement; a small room where he keeps many pictures of his mother, who committed suicide when he was a child. A journey into hell for our lead, who becomes a serial killer, just because he is in deep traumatic shock of all this. The souvenirs of his dead mother that will be lost..." 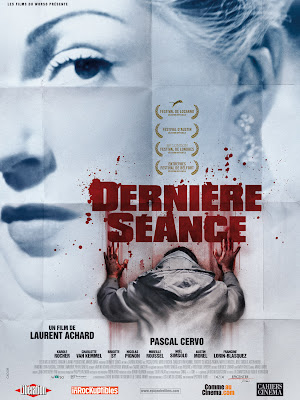 Posted by celinejulie at 6:21 PM No comments:

I like the last scene of this stage play very much. The performances of Warunya Mungaew and Rasima Garnjanaguntiga in that scene are superb. The dialogue in that scene is as classic as some dialogues in Mike Leigh's films. This is not a kind of dialogue which is full of "memorable sentences", but it's a kind of dialogue which reveals bitterness in life, bitterness which is repressed for so many years until one cannot hold it inside any more.

TOP GIRLS is written by Caryl Churchill, and it is inspired by many things, including the same stories which inspired the film POPE JOAN (2009, Sönke Wortmann, A+) and HEAVENLY CREATURES (1994, Peter Jackson, A+++++).

One of the characters in TOP GIRLS is Griet, which is inspired by the painting MAD MEG (1562) by Pieter Bruegel the Elder. 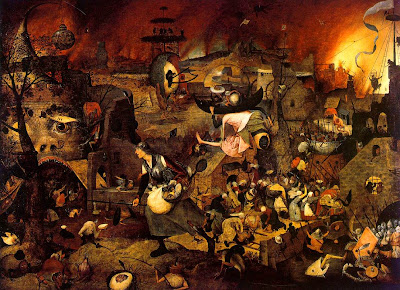 Some scenes in THE CHILDREN'S HOUR are very intense. These scenes make me feel a strong urge to slap the faces of some characters in the play. It reminds me of the kind of feelings I had while I was watching the film WOMEN PRISON (1988, David Lam). In that Hong Kong film, the bitchiness of some characters and the extremely intense situations in the film make the viewers want to jump into the film to help the heroine fight against the villainesses.

As for THE CHILDREN'S HOUR, I also like the hairstyle, the costume, and the personality of the character Martha Dobie very much, because it unintentionally reminds me of the German actress Irm Hermann.

I think the ending of the play is interesting. It feels realistic to me. I wonder if I am the one who writes the play, instead of Lillian Hellman, how will I end the play? I think I may end the play by making it a revenge fantasy, instead of ending it realistically like this. I may end the play by making it resemble BAISE-MOI + DOGVILLE (Lars von Trier). In my imaginative ending, the heroines will get revenge at the end by killing Amelia Tilford, Mary, and some other people in the town, before they commit suicide. 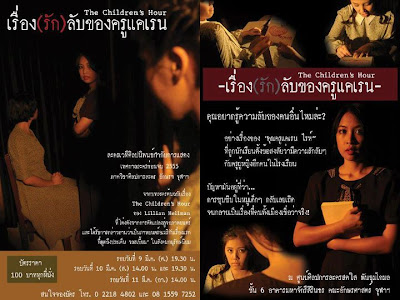 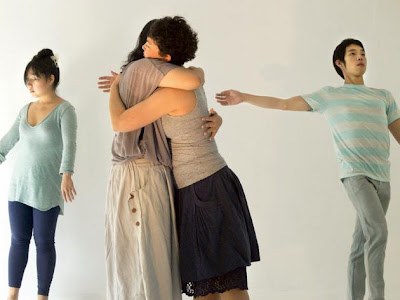 Posted by celinejulie at 10:25 PM No comments:

This art work comes in the form of Snakes and Ladders game. Many squares in the game contain some anecdotes of or funny parodies on the Thai art scene. The events described in the square can move you up or down in the game.

The events described in the squares are something like this:

1.You give tiger balm (ยาหม่อง) to art exhibition attendees. A curator is impressed by this kind of art very much. Your career is advanced a lot.

2. You cook spicy papaya salad (ส้มตำ) for art exhition attendees, but it gives them diarrhea. Your exhibition is shut down.

3. Your film project THE LOVE SPELL OF GRANNY MIAN (มนต์รักยายเมี้ยน) gets a lot of attention.

This art work is in the exhibition CULTURE: COMMEMORABLE, FORMLESS, SHADOWLESS, which is held on the fourth floor of BACC until March 11, 2012. 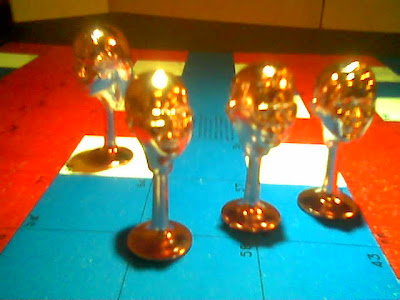 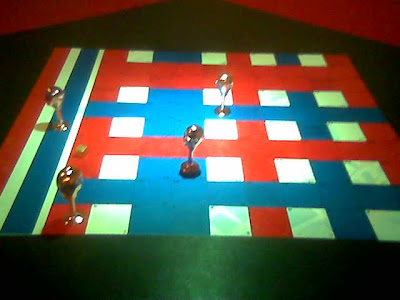 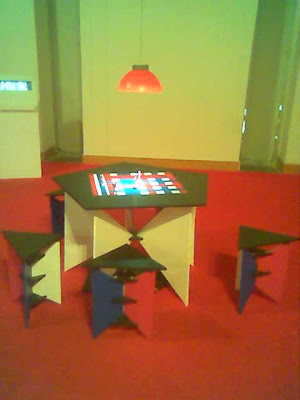 Posted by celinejulie at 3:46 PM 2 comments:

" “'We are told that once upon a time there was an old man called Yukong ... He decided to carry away, with the help of his sons, two great mountains which blocked the access to his house, by means of a pick. Another old man ... burst out laughing and said to them: ‘You will never be able to move those mountains all by yourself.’

Yukong answered him, ‘When I die, there will be my sons ... In this way the generations will come after each without end ... With each blow of the pick, they will get that much smaller ... Why then won't we be able to flatten them?’

Heaven was moved by this and sent down to earth two celestial genies who carried away the mountains on their backs. Our heaven is none other than the masses of the Chinese people.”"

There is a book about Joris Ivens at Thammasat University Library. 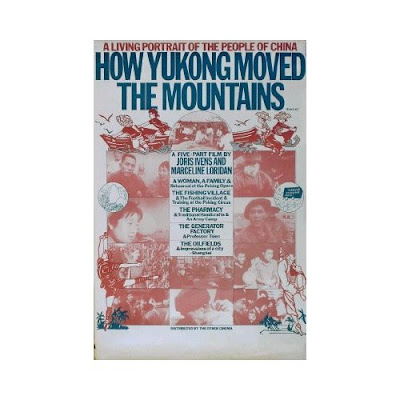 Posted by celinejulie at 2:10 PM No comments:

You can watch this film here:

These are images from a fourteen-and-a-half-minute-long static take in AFTERNOON TIMES (2005, Tossapol Boonsinsukh). One of my most favorite scenes of all time. 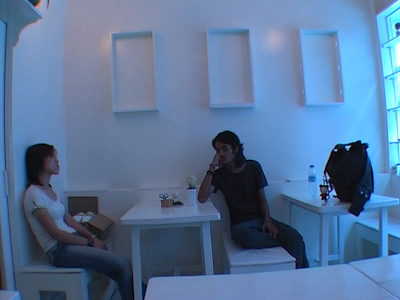 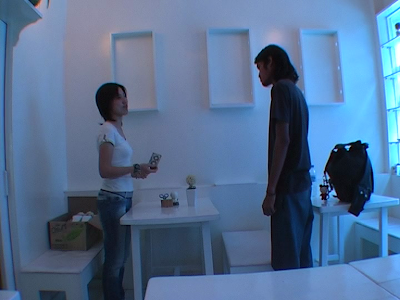 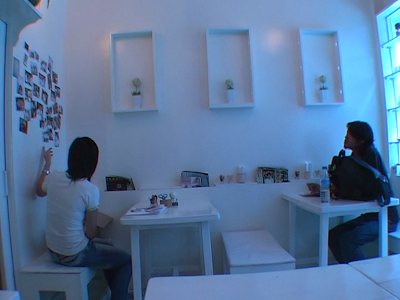 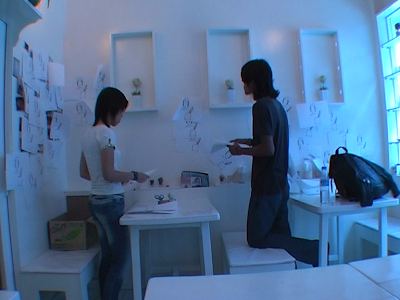 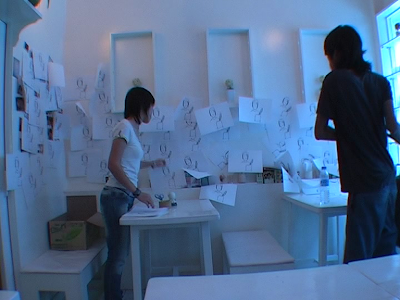 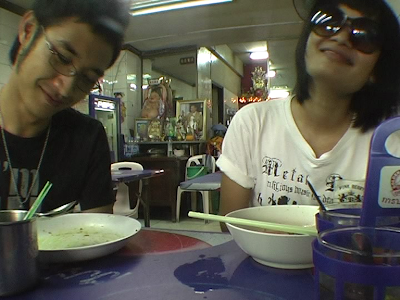 A guy wearing big glasses in Tossapol Boonsinsukh's film (WHEN WILL WE MEET AGAIN?) 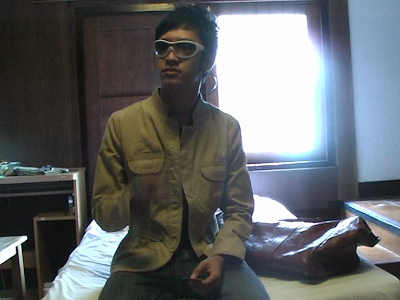 Thanks to Tanakit for telling us about this music video.
Posted by celinejulie at 11:20 PM No comments: