In the synopsis of this film, it says that Jean Speck opened Zurich's first cinema. So I assume that Jean Speck was a real person who used to live in the past. However, this film is as far from being a biographical film as possible, despite its title. In a way, this film reminds me of THE DEATH OF MARIA MALIBRAN (1972, Werner Schroeter), which is one of my most favorite films of all time, because both films choose not to tell us the life of the titled character, but choose to present us many seemingly incoherent scenes which may or may not concern the titled character, and both films give me very powerful cinematic experiences.

Like THE DEATH OF MARIA MALIBRAN, JEAN SPECK (1860-1933) is another film which is beyond my ability to describe. I will not try to analyze this film, its structure, or its meanings. I just know that it overwhelms me with its visual and sound. All I can do is to try to elaborate a little bit about a few things I like in this film, though I know that my writing cannot adequately convey the powerful feelings I get from watching this film.

Things I find interesting in this film include:

1.The seemingly incoherent quality of the scenes. I don't know what many scenes in this film mean. I don't know how many scenes in this film concern Jean Speck. I'm not sure how each scene is related to any other scenes in the film. Having said that, I think many scenes in this film seem to be tangentially related to one another, or to cinema, or to shadow and light. And the seemingly incoherent quality is a good thing in my point of view. Like THE DEATH OF MARIA MALIBRAN, JEAN SPECK (1860-1933) puzzles me with scenes which are not clearly connected to one another, thus the film arouses my imagination. The film encourages me to try to connect the dot, to try to find the connections between each scene, or to imagine some connections by myself. The film doesn't let me be a passive viewer.

1.1 The scenes which seem to be clearly connected to Jean Speck include the first scene which show a few viewers coming to sit in a theatre, and the scene which shows stills from old movies. There is also a strange sound in some scenes which make me think about the rolling of film in a projector or something like that.

1.2 The scenes which make me think about various aspects of cinema include the scene which shows a couple using a bathtub curtain as the screen; the scene in which some people shut the curtain to make the room go dark (so that the room can be fit for a film screening); and the scene which shows shadows of a man appearing repeatedly for ten minutes, while we hear various voices at the same time. These voices make me think about voices of the audience leaving a theatre, though we see the shadow of only one man.

1.3 Most scenes in this film stun me with their shadow and light. In the
first scene, we see light from a flashlight sweeping around the seats in a theatre from time to time. Each sweep lets us see how the number of the audience has changed or whether some viewers have changed their seats. Then we see some abstract white light moving in a black screen. We see shadow of a man appearing repeatedly for ten minutes. We see a guy driving a car at night, but we only see his face intermittently, because the lights from the street don't reach his face from time to time. We see shadow of a camera, and light and shadow caused by a spotlight which a guy tries to fix for ten minutes. We see light from a flashlight held by someone who seems to search for something in an old room. We see a light moving around on a bed. We see views of trees at night passing by very fast. We see a guy walking in a quiet town at night. The lights in the street in this scene is beautiful. We see a guy looking at his reflection on a train window, or maybe he looks at the nighttime view outside the window. The light and shadow in all these scenes are stunning.

2.The sound. I think this film has the most complicated layers of sound among Rashidi's films that I have seen. There are a few layers of sound presented at the same time in many scenes. One layer of sound is a sound effect which is very haunting. I don't know how to describe this sound effect. I'm not sure if it can be called a droning sound or not. This droning sound is presented in many scenes, and in some scenes the intensity of this sound effect is gradually increasing until it reaches a certain point, but not "a climactic point", because there seems to be no conventional climax in this film which tells us no story.

3. The opacity. There are many scenes I like in this film, though I don't know their meanings at all. For example:

3.1 The scene of white light moving in the darkness

3.3 Is it the same guy whose shadow we see appearing repeatedly for ten minutes, the guy who drives the car, the guy who tries to fix a spotlight four times, the person whose legs we see on a bed, the guy who wakes up and goes down the staircase,  the guy who walks in a quiet town at night, and the guy in the train? How many guys have we seen in these scenes? Does it matter to know the answer? I guess it doesn't matter.

3.4 Something in this film makes me think about a splitting existence/identity/consciousness or something like that. Because this film focuses on shadows, it makes me think about shadow as a kind of thing which splits from us. Apart from intriguing shadows in this film, there is a very intriguing scene of a guy waking up in his room, but he is presented as a ghost. His body is transparent. And the ghost even splits itself into two later. The scene of a guy staring at his reflection near the end of the film makes me think about the splitting of oneself, too. What does this scene mean? Unintentionally, somehow this scene reminds me of how I watch films nowadays. In the past, I saw many films in a big theatre like in the beginning of JEAN SPECK (1860-1933). At present, I watch many films, including this film, in a laptop in my own room. My laptop is even smaller than the train window that the guy stares at near the end of the film, and while I watch films on my laptop, I also see a faint reflection of myself appearing on the screen. Watching films nowadays means I watch both the films and my own reflection on the screen at the same time. It's like what the guy does at the end of this film, watching both his reflection and the view outside from a small room.

3.5 Why do these films focus on legs and feet? We see four legs in a bathtub, two legs on a bed, and some legs of people walking in front of a building?

3.6 The legs-in-a-bathtub scene is very intriguing. What do these two people do in the bathtub? Are they making love with, playing with, or killing each other?

3.7 Why does the guy try to fix the spotlight four times?

4.I like the haunting quality and the grainy quality of this film very much.

6. If I have to screen other films together with JEAN SPECK (1860-1933), I will choose THE DEATH OF MARIA MALIBRAN and these films:

There is an abstract quality in some scenes in JEAN SPECK, especially the scene which shows white light moving in the darkness, and some scenes which seem to look so closely at something that we can only see the texture of the things, but not the things themselves. This reminds me of MA DANG BO SAI, because many scenes in MA DANG BO SAI show us unidentifiable things, too.

I FORGOT THE TITLE also deals with the history and some special qualities of cinema in a very haunting and experimental way like JEAN SPECK.

In conclusion, JEAN SPECK (1860-1933) tells no story, but it gives us one of the most powerful presentations of recorded moving shadows, lights, and sounds. That is cinema. 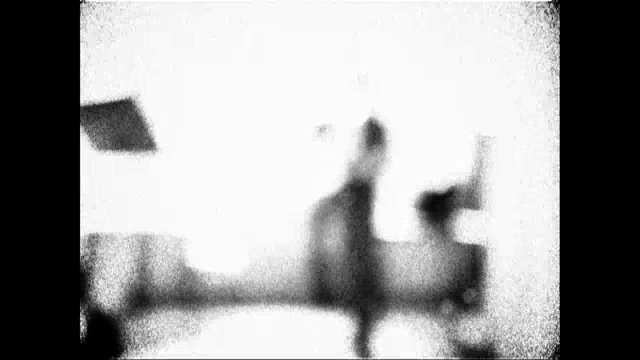 Posted by celinejulie at 1:54 AM