This is the photo of MARIANNE DENICOURT, an actress in LA BELLE NOISEUSE (1990, JACQUES RIVETTE, A+) 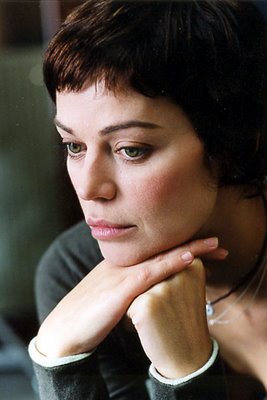 This is copied from an e-mail I sent to someone:

I like LA BELLE NOISEUSE very much, and I’m glad that you like it. I love Jacques Rivette a lot, but this movie differs a little from other films by Rivette that l love. Rivette’s films that I love are a little bit surreal, and concern with some mysteries which are easily revealed at the end. LA BELLE NOISEUSE has no intriguing mysteries, and it is not surreal. It is very naturalistic, and the nice atmosphere around the house came close to the one found in Eric Rohmer’s films. However, the relationships between characters are more bitter and more difficult to understand than the relationships between Rohmer’s characters.

I like the ending of LA BELLE NOISEUSE very much. It is an abrupt ending, but feels quite right. The three female characters in this film are marvelous—EMMANUEL BEART, JANE BIRKIN, MARIANNE DENICOURT. I like the patience the film took to portray how the character paints. And I like that the film never shows the painting.

Though I like it a lot, I think I don’t quite understand this film fully, especially some characters. That makes me want to see this film again when I have free time.

I try to think about other films which show the complex relationship between the painter and the model, but I can’t think of any films now. But if you like films about painters painting, I suggest you see these films:

I think in the movie GANG OF FOUR (1988, JACQUES RIVETTE), there are some dialogues about the hidden masterpiece of a painter. That means this topic had been inside Rivette’s mind for some time, before he had a chance to elaborate on this topic in a feature-length film.
Posted by celinejulie at 9:20 AM