Chulayarnnon Siriphol's retrospective will be held this Friday on the 9th floor of BACC at 1500-1800 hrs. The event is held by Bodin Theparat. The poster is designed by Nattaphan Boonlert. The details can be found in the link below:
http://www.facebook.com/event.php?eid=194731583900668

This is what I wrote about Chulayarnnon in Indian Auteur:
http://www.indianauteur.com/?p=976

"Chulayarnnon made Hualampong (2004, 12 min) when he was a high-school student. This film observes an old man who frequently came to a railway station to take photos. There is nothing dramatic happening during the whole film. The film observes this man very patiently. This film drastically changed the attitude people had had towards Thai high-school students-filmmakers. Before this film, we used to think that high-school students only made funny films. After this film, we know we can never underestimate these teenagers any more. Chulayarnnon's masterpiece is Danger (Director's Cut) (2008, 14 min), which tells a story about a murder in an apartment building. What makes this film extraordinary is that the script of this film and some harsh comments on this film are also inserted into the film. We see texts from the script and texts commenting on the film appearing on the screen from time to time. This film is originally made as a thesis in a university. The harsh comments were made by a teacher. When we watch this film, we don't only see a murder story, but we also learn about its narrative structure and the bias against this film. I have never seen a film as self-reflexive as this before. An instant classic!"

The novel GOLDEN SAND HOUSE has been adapted into countless Thai films and TV series. I have never been interested in them, because I can't identify with the heroine. However, Chulayarnnon's version of GOLDEN SAND HOUSE is very interesting, because in this version he casts his own family and a female servant from Myanmar. The film doesn't try to look realistic. These amateur performers never try to act convincingly. But that's the charm of the film. The use of amateur performers, and the extreme contrast between the looks of these performers and what we usually expect from the looks of these characters remind me of HAUNTED HOUSES (2001, Apichatpong Weerasethakul, 60 min) and I-SAN SPECIAL (2002, Mingmongkol Sonakul).

If I remember it correctly, the first part of this film is a little bit like PSYCHO. We see a woman who is going to be killed by a man. Suddenly, in the second half of the film, the act of murder is interspersed with scenes of buildings crumbling down and old photographs. I was shocked. I don't know what happens.

Many films shock us by showing the murder on screen. This film shocks me by showing scenes of murder, dilapidated buildings, and old photographs alternately. Thus, it thrills me three times more than other films.

If I remember it correctly, this film shows us the photograph of Chulayarnnon. The photograph is slowly burning. There is nothing more in this film. But this is powerful enough.

This is the first film that I saw that interweaves a thriller story, its script, and its criticism into the film.


5.AN AUTOMATIC VIDEO LOOP: REGISTRATION INSTRUCTIONS BEFORE AND AFTER VIEWING THE ART CENTER (2010, 14 min, co-directed with other members of SCENE 22)

This is the first film that I saw that comes in the form of a quiz with multiple choices.

This is one of my most favorite films I saw in 2010. This film makes me cry when it interviews a mother who lost her son in a political violence in Bangkok. But what shocks, surprises, and delights me in the film is the inclusion of strange scenes of head lice, the spirits of head lice, hair suffering from head lice, and hair free from head lice. I don't know what these scenes mean. But they are extremely sublime and feel so spiritual to me.

This film is made from a found footage of Amway promotion video. It makes us laugh uncontrollably. I had never thought that a corporate promotion video can be adapted into such an interesting film like this before I saw this film. 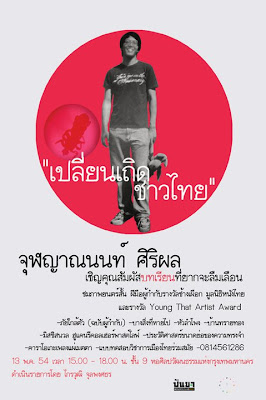 If you want to financially support Chulayarnnon's new film, you can follow the link below:
http://dominofilm.blogspot.com/2011/04/supporters.html