Maybe this documentary should be screened after STORM OVER ASIA (1928, Vsevolod Pudovkin, Soviet Union). If I remember it correctly, STORM OVER ASIA does not portray the Buddhist institutions in Mongolia positively. STORM OVER ASIA is a powerful film, and it is right to attack bad things in religious institutions. But somehow I feel the film is a little bit too biased.

There are many interesting things in THE MYSTERY OF THE SIBERIAN MUMMY. One thing that I like very much is that the film talks about many Buddhists in Siberia who were massacred during the Stalin era. This massacre of the Buddhists somehow makes me think about the ideology presented in STORM OVER ASIA. I don't think that Vsevolod Pudovkin supported this massacre. But somehow an ideology in his film might be used in a wrong way or was used by an evil person, and led to bad things.

Watching these two films reminds me that both religions and communism are not good or bad things in themselves. What's important is how to use them or the persons who use them. 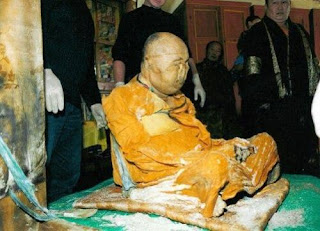